Towards a performance-based approach to language teaching

'Performance' is a term with a long history in language pedagogy, meaning anything from 'production' to 'usage' to 'drama activities'. In this keynote talk for the HandsUp Project conference, I explore these different meanings, and argue that they all support the notion that performance - however we define it - occupies a key role in language learning and teaching.

Terrence Rattigan’s popular comedy French Without Tears (1936) was named after a well-known textbook of the time. The title plays on the widespread longing for a language teaching method that is painless, pleasurable, and fast. Fun, in short. But can language learning really be fun? Isn’t it about effort, concentration and the long haul? In this conflated talk (No pain, no gain + All work and no play) I argue the case for and against foregrounding fun as a guiding principle in methodology and course design. 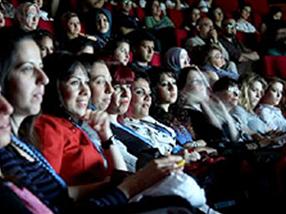 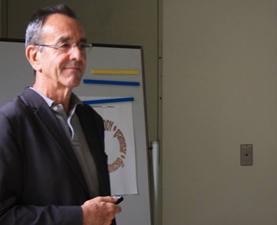 Learning, then using. Or learning by using?

Traditionally, curriculum designers have subscribed to an approach that might be described as ‘learning, then using’. That is to say, the learner studies the linguistic systems (including grammar, phonology etc) and then applies them in communication. A fundamental premise of the communicative approach (as first conceived) was that a more effective (and more engaging) approach might be ‘learning BY using’. More recently, usage-based theories of second language acquisition have lent support to this view, and would seem to vindicate ‘fluency-first’, ‘whole language’ and ‘task-based’ approaches. In this talk I would like to explore the implications of this alternative paradigm for the teaching of ANY additional language. 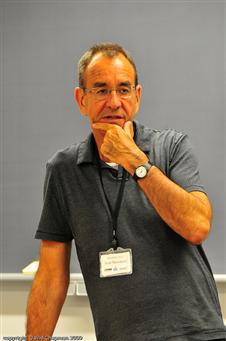 Hyper polyglots: what can they teach us?

Self-styled hyper-polyglots proliferate on the internet, each offering a plethora of advice and/or merchandise. Most are self-taught and all claim impressive levels of 'polyglossia'. But are they to be taken seriously? Is there a 'method' that they notionally share? This talk evaluates some of their claims, and suggests some takeaways. 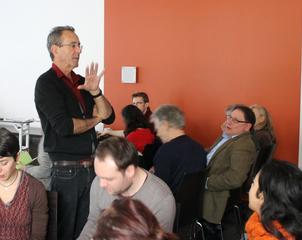 Correct me if I'm wrong

Based on the speaker’s own recent experience of ‘de-fossilizing’ his Spanish, a case is made for the key role that correction (including explicit negative feedback) plays in boosting student achievement and enhancing teacher effectiveness. In our well-intentioned efforts to promote authentic communication in the classroom we sometimes overlook the one component of classroom interaction that distinguishes it from other forms of interaction, and which makes it especially effective: i.e. corrective feedback    In this workshop we will look at different options for the form, frequency and timing of corrective feedback, with special reference to oral production, and discuss how these might impact on learning.

Working with text and from text: A text-based approach

All language in use exists as text. It follows that, to teach language for use, we should focus on texts – not just as the end-point, but as the starting point. What, then, would a text-based approach look like – at the level of both curriculum design and individual lessons? What theories of language might underpin it? And what kinds of activity would characterize it? In this talk, I address each of these questions, as well as looking at the implications for teacher education.

Seven ways of looking at grammar

The SLA Hall of Fame


The relatively recent history of second language acquisition (SLA) research has produced a small number of case studies that have an almost iconic significance in the literature: you only have to mention Alberto or Wes or Nora, and scholars will know exactly what feature of language acquisition you’re talking about. In this talk I briefly review these figures in the SLA ‘Hall of Fame’, and suggest that they still have relevance to today’s classrooms.

Accuracy and fluency: resolving the tension

It’s generally accepted that the Communicative Approach was instrumental in shifting the emphasis away from accuracy and on to fluency. But many teachers (and learners) still feel that the tension between accuracy and fluency is unresolved.  Either the emphasis on fluency (in speaking, for example) threatens their need for accuracy (in writing). Or that fluency activities in the classroom are often undermined by errors and the need for correction. Or that course materials, syllabi and exams focus too much on (grammatical) accuracy and not enough on fluency. 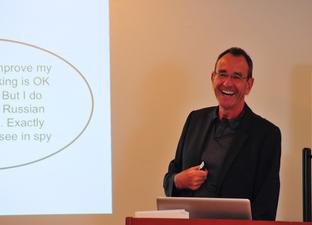 Seven things beginning with A

The history of education, and language education not least, has been a history of contrasted metaphors, by means of which the often invisible processes of learning are conceptualized and modelled. Over time we have witnessed a shift from cognitive models to more socially-embedded – even ecological  – ones. Drawing on selected entries in The New A-Z of ELT (Macmillan 2017) I track these changes and suggest their implications for ELT.

Classroom speaking is traditionally thought of either as a way of reinforcing newly learned language structures – that is, as accuracy practice – or as a means of developing the skill of speaking itself, i.e.as fluency practice. But it is now thought that speaking may also be a site, not just for practising language, but for learning it. Having outlined some basic principles, I aim to show how they might be realised in classroom practice.

In this talk I use the occasion of the 50th anniversary of the IATEFL conference to review some of the major developments in the teaching of EFL since the mid-sixties  and in particular the advent of the communicative approach, including the ideological context from which it emerged, its initial promise, its dispersion, its dilution, its normalization, and its discontents.

It’s been my privilege - as a teacher trainer, examiner and former director of studies – to observe some really memorable classes. Let me a share a few of these with you, and let’s see if we can draw up some principles for good grammar teaching.

The secret history of methods

I’m regularly asked “What’s the latest method?”, suggesting that the concept of method persists, despite recent attempts to bury it (“The method concept is dead!”).  I will review the history of methods, both to critique it, and to draw some lessons from past methods, arguing (a) there is nothing new under the sun and (b) dogme is not a method!

Dogme (or Teaching Unplugged) shares with a number of other methodological options the belief that a grammar-driven, coursebook-based approach sits uncomfortably with the needs and learning dispositions of immigrants, refugees and other communities loosely bundled together as ESL learners. What do these methodologies share that might suit them to this sector? In this talk I look at a number of the methodological options that have been proposed – which I will loosely characterize as ‘ecological’ – and invite you to evaluate them in terms of your own experience, needs and values.

The separation between mind and body – a fundamental ‘truth’ in modern Western thought – is succumbing to a view that thinking, and hence learning, is ‘embodied’, i.e. that the mind extends beyond the grey matter of the brain, and is realised, at least in part, through gesture, movement, and physicality. What might this mean for (second) language learning?  In this talk I’ll review developments in this exciting new field, and (very tentatively) suggest some applications.

Is there discourse in this course?

Traditionally, language teaching has targeted the three systems of phonology, lexis and grammar. But what about discourse, the system "beyond the sentence"? How systematic is it, and can it be taught? In this talk, I review the different senses of "discourse" and show they operate in some very simple - classroom-friendly - texts. I also demonstrate some ways that corpus linguistics can inform our understanding of discourse.

It’s a truism that no single method is going to meet the needs of all teachers and all learners, either locally or globally. Hence, we now operate in what is called the post-method era. Yet methods formerly provided teachers with a certain sense of security, a role which perhaps coursebooks now fulfil. This security is illusory, though, if it is not grounded in some basic principles of learning and education, principles that I attempt to identify, and which (I argue) constitute a blueprint for a coherent approach to language teaching.

Is language a countable noun?

We take it for granted that there is language (the human capacity for verbal communication) and that there are languages (specific forms of this capacity tied to a particular locality, social group or race, such as Japanese, Swahili, Latin etc). But how do you separate (uncountable) language into (countable) languages? Where do you draw the lines? Who decides?  These questions may seem academic, but in fact they have an important bearing on the way we define, describe and prescribe English – among other languages. In this talk I will problematize the notion of language, and argue that many of the decisions that we take for granted (e.g. what to teach, what to correct, what language to use in the classroom) have strong ideological underpinnings.

Grammar or speaking (or both?)

Can you learn to speak without grammar? Can you learn grammar without speaking? Is there a special grammar of speech? What’s the best way to learn speaking?

In this workshop I will address these questions and demonstrate ways that speaking and grammar can be integrated.